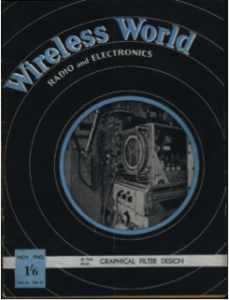 70 years ago, in October 1945, on the heels of World War II, Arthur C. Clarke published his now famous article in Wireless World, “EXTRA-TERRESTRIAL RELAYS, Can Rocket Stations Give World-wide Radio Coverage?” It would be 12 more years before the Russians would launch Sputnik, followed closely by the U.S. with Explorer 1 on a Jupiter C rocket. And the well-known space race ensued.

Caption: The concept of geostationary orbit and global coverage as depicted by Arthur C. Clarke. “ It would remain fixed in the sky and unlike all other heavenly bodies would neither rise nor set. The stations would be arranged approximately equidistantly around the earth, and the following longitudes appear to be suitable: 30°E – Africa and Europe; 150°E – China and Oceana; 90°E – The Americas.”

As early as 1958, the U.S. government and the members of the International Telecommunications Union (ITU) apparently saw the wisdom of selecting and reserving X-band for exclusive government, global, and deep space satellite communications. They knew then, and we know now, that of the various possible frequencies, X-band offers the best choice to meet government, and especially military needs, characteristics of which include,

In 1962, the Air Force initiated the Initial Defense Communication Satellite Program (IDCSP), which would become DSCS and predecessor to today’s WGS. Interestingly, motivated by budgetary considerations, then-Defense Secretary Robert McNamara ordered cancellation of this R&D program. Despite opposition “by most of his subordinates, the State Department, and the National Aeronautics and Space Council,” McNamara proposed in 1963 that the newly formed Communications Satellite Corporation develop a system meeting both commercial and military needs. Congressional hearings drove the decision in 1964 to get the military’s satellite communications program back on track, that it should be developed separately because of the U.S.’s unique and vital national security requirements. The (rather searing) congressional report indicated, “Valuable time has been lost. Had the [defense] department moved ahead according to plans and policies laid down two years ago and approved by the Joint Chiefs of Staff, a system could have been operating now.” In fact, in those intervening two years, AT&T and a consortium of multinational companies had completed and launched the commercial satellite Telstar 1, the first geosynchronous communications satellite.

Launched in 1966, the first Defense Satellite and Communications System (DSCS) operated in X-band, the frequency designated exclusively for government and military use. The first DSCS was used to transmit reconnaissance photos and other data during the Vietnam War. Each generation of DSCS since then has been exponentially more powerful; and the USG and DOD have kept X-band at the core of their communications capabilities.   Will there ever be enough X-band to meet the requirements of the military? No, quite the opposite. After years of study, the USG has adopted military Ka-band to supplement its capacity to meet ever-growing demand and usage.

While DSCS was the warhorse for the military’s communications needs for decades, the Persian Gulf War (1990-91) made it apparent that the warfighter’s requirements could only be met with the augmented capacity of commercial satellites. Planning for the current WGS constellation began during the 1990s. Originally dubbed the Wideband “Gapfiller” Satellites, they were renamed Wideband “Global System.” It wasn’t until October 2007 that the first WGS was successfully launched. Commercial systems became essential to the DOD in the 1990s and early 2000s.

There are capabilities that cannot be found on the commercial market. Military satellites provide high-volume, secure voice and data communications. However, it is, and will no doubt remain, imperative that the military make use of commercial satellites (and commercial frequencies) to augment its needs for surge, reach and expansion.

Today, XTAR celebrates over 10 years of service to the USG as the first commercially-operated non-preemptible X-band communications satellite fleet dedicated exclusively to military and government users. The government and military community of users are among the most expert and capable, with continuously evolving needs both in space and on the ground. XTAR is proud to offer X-band service to the DoD that is 100% interoperable and compatible with DSCS and WGS.