Herndon, Va., December 4, 2014 – XTAR, LLC, a commercial satellite operator delivering X-band services to government users, has been contracted by NASA’s Jet Propulsion Laboratory (JPL) to provide X-band space segment for the Ka-Band Objects: Observation and Monitoring (KaBOOM). KaBOOM is an experimental system to demonstrate uplink arraying of reflector antennas. Technologies developed in KaBOOM are expected to enable construction of a radar system whose primary goal is to track asteroids. 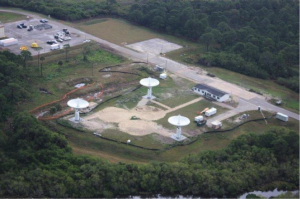 Overhead shot of the KaBOOM site at the Kennedy Space Center. It is comprised of 3-12m diameter antennas. The operations center is seen just to the right of center. Spacing between the antennas is 60m.asteroids that have the potential to impact Earth.

XTAR will supply X-band space segment for a period of one year ending October 1, 2015. The capacity will be used along with other resources for testing techniques for phase-alignment of multiple large antennas.

NASA has several major goals for the KaBOOM interplanetary radar system, including protecting the planet through tracking and characterization of objects; improved detection and tracking of debris in Earth orbit; and instituting a rapidly available uplink capability for spacecraft emergencies. The X/Ka-band radar system also has applications for cost-effective space situational awareness.

“The KaBOOM program will allow NASA, and even the DoD, to track and characterize potentially hazardous objects,” said Andrew Ruszkowski, Chief Commercial Officer of XTAR. “The variety of applications which could result from KaBOOM to affect space situational awareness and therefore protect humankind’s safety is inspiring.”

In addition to tracking objects, KaBOOM will generate data to fill capability gaps and address collection and operational needs for NASA and other agencies. For example, analysis of the data could aid in the orbit determination of some near-Earth objects mission targets.

In the NASA Authorization Acts from 2005 and 2008, Congress mandated that NASA discover 90 percent of all near-Earth objects 140 meters in diameter or greater by 2020.