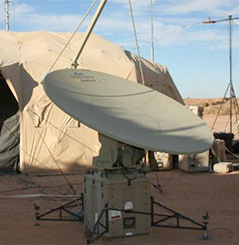 In the course of satellite communications architecture planning, like all military operations planning, it is always wise to have a main Course of Action (COA) and a fallback COA.
As a main COA, all DoD program offices, acquisition activities, and J6 SATCOM planners should be purchasing equipment that is 100% compatible with the DoD’s own Military Satellite Communications (MILSATCOM) constellation known as Wideband Global SATCOM (WGS). Why? Because when the DoD purchases WGS-compatible equipment (i.e. X-band SATCOM terminals for aircraft and UAVs, as examples), it saves the DoD millions of O&M dollars annually because it operates using free bandwidth, using satellites it already owns. Not only is this common sense, it is in compliance with OSD-AT&L’s Better Buying Power 3.0 initiatives. Even better: to get on WGS, all DoD units need to do is schedule it.

But what happens when an emergent need arises that WGS scheduling cannot support? Or risk of preemption on WGS by higher-priority missions is too high? The fallback COA is NOT to purchase additional terminals, associated equipment, and suffer skyrocketing acquisition and sustainment costs: for X-band, the answer is to simply repoint the X-band terminals to XTAR, which provides 1.44 GHz of commercially-available, 100% WGS-compatible bandwidth to military and government customers around the globe – and has been doing so since 2005.

It is often said that an Army (and Navy, Marines, and Air Force for that matter) marches on its belly, meaning that the projection and sustainment of power is limited by the health of its military supply lines. It is wasteful and complicated to repurchase, sustain, and transport additional, non-WGS compliant SATCOM hardware just because WGS becomes temporarily unavailable. All DoD program offices, acquisition staffs, and J6 SATCOM planners need to do is (a) demand WGS compatibility in all of their purchasing efforts, and (b) repoint their WGS-compliant antennas to the XTAR constellation when WGS is unavailable – and then march onwards. Let’s smartly save DoD’s resources so we can provide our troops more boots, bullets, and combat power.